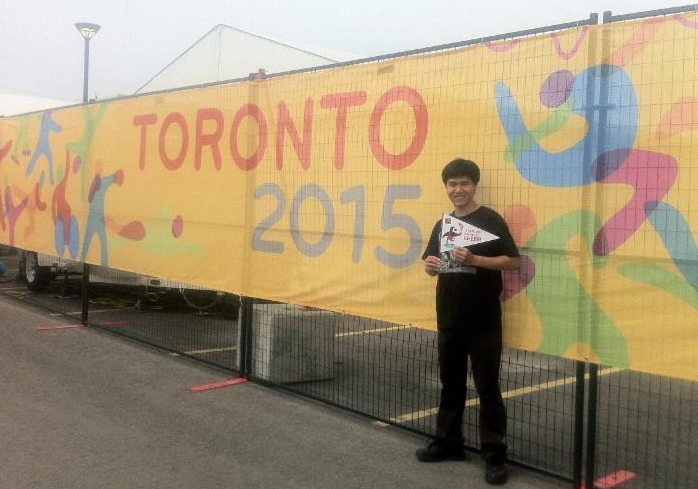 Stepping out! David Zhu of AMD incorporates walking into his daily schedule as often as he can – and he encourages others to try it, too! SCMRH spoke to David about his tips for walking in inclement weather, and how fitting in a walk is easier than you think!

How often do you incorporate walking into your lifestyle or everyday commute?

About 3-4 days a week, at least part of my commute to and from work involves a good amount of walking. I also take at least one walk on the weekend just for leisure.

What are your main destinations?

I mainly walk to transit stops on my way to and from work, and also to local stores when I need things around the house. When my girlfriend and I meet up, we often walk to and from restaurants, malls, transit terminals, and our houses.

What are the main factors which influence you to walk?

My biggest reason for walking is to save on transportation costs; it helps that I live just close enough to walk to most of the places I need to go, including major transit stops. Being able to take in all the street sights, at my own pace, is also a draw.

How do you adapt your walk commute for the weather or different seasons?

I find that no matter what the weather’s like, even during the winter, sidewalk conditions are usually no worse than on the roads, so thankfully I often just need to make sure I wear appropriate clothes. But on rainy or snowy days, I may take alternate routes to avoid park footpaths due to muddiness and/or lack of maintenance.

What are some helpful tips for people who would like to incorporate more walking into their day?

When going out for lunch or dinner from work, try walking if possible; some my coworkers often drive to restaurants less than a kilometre away, even though their actual time savings would be insignificant. It can also be interesting to look at a bike trail map, the Cycle Map view from OpenStreetMap of your local area, or the Smart Commute trip tool; you may realize that for nearby places, there are lots of good walking routes to choose from!

Do you have any messages or advice for York Region drivers in regards to watching for pedestrians?

Too often in my experience, when using crosswalks, I observe drivers making right turns over the crosswalks without stopping or looking for pedestrians, regardless of the traffic light colour. It’s really important for drivers to know that pedestrians always have the right of way over turning cars; additionally, since drivers must always stop before turning right on red, they should use their time to observe the crosswalk.

What would improve your current walking commute?

One of the few seasonal issues I encounter is that in areas where the sidewalk is narrow and close to the road, snowplows tend to pile up snowbanks right on the sidewalk; the snowbanks often harden into ice after a few days, making the sidewalk even more impassable. A better snow-clearing strategy for such situations would help a lot, considering that sidewalks are otherwise still quite usable in winter.

Checking out a new trail! Dereje Tafesse, Capital Works Engineer at the City of Markham, often cycles from his home in east Markham to his workplace at Markham Civic Centre, which includes riding along the multi-use pathway through Rouge River Valley and Milne Dam Conservation Area. Once he arrives at work, he incorporates his observations from the ride into planning the next phases of the trail. Smart Commute Markham, Richmond Hill caught up with Dereje to ask about his cycling experience and advice for anyone wishing to begin cycling to work!

Smart Commute MRH: What is your cycling route to work?
Dereje Tafesse: I usually take two different routes. One of the routes that I take is along the newly constructed multi-use pathway (MUP) between Main Street Unionville/Carlton Road and Drakefield Road, which travels through Rouge River Valley and Milne Dam Conservation Park. This route is part of the proposed 15 kilometre MUP from 16th Avenue and Kennedy Road to Bob Hunter Memorial Park. This project is managed by the City of Markham’s Engineering Department. As the Project Manager of this MUP, I was involved in the first phase of trail construction, which consists of 3 kilometres of limestone paving, boardwalks and three pedestrian bridges. This section opened to the public in 2014, and provides safe access for pedestrians and cyclists. Once the second phase of MUP construction is completed, I will be able to access the MUP at 14th Avenue and 9th Line, and travel to Carlton Road and Main Street Unionville without cycling on the street!

The MUP provides the following advantages:

The other route I take is along Box Grove By-pass (on boulevard), Church Street, Raymerville Drive, Carlton Road and Main Street Unionville. I found traffic on these streets is lighter during the summer months.

SCMRH: How long is your commute?
DT: About an hour each way.

SCMRH: Why did you decide to start cycling to work?
DT: I have participated in Bike to Work Day in previous years to promote a healthy lifestyle and environmental awareness in the workplace. This year, Taskin Shirazi, Transport Demand Management Coordinator at the City of Markham, played an important role in encouraging myself and other staff to cycle to work. Taskin and I live in east Markham and began biking to work together. As I understand the advantages of cycling, it was easy for me to decide to cycle to work without any hesitation. In addition, the completion of the Phase 1 MUP, from Carlton Road and Main Street Unionville to Drakefield Road through the Milne Conservation Park and the Rouge River Valley, facilitates, promotes and encourages safe cycling while providing me with the opportunity to admire nature and the surrounding view!

SCMRH: By cycling the trail, are you able to provide insight during the design and implementation stages to other members of your department who have not cycled on it?
DT: Yes. This is the first of four phases of this project. Construction for the second phase of the project from Markham Road to 14th Avenue through Rouge River Valley will commence in early September 2015. This phase includes the construction of four pedestrian bridges, boardwalks and limestone and asphalt trails. Cycling through the already completed MUP has helped me identify issues that can be rectified during the design stage, such as identifying proper directional and wayfinding signage, as well as correct path alignment, to safely direct pedestrians and cyclists. In addition, choosing the right surface type is also very important to encourage cycling.

As part of the design, certain areas of the MUP will also be accessible. These areas will be clearly identified and labelled for public use.

SCMRH: Has cycling positively impacted your health and well-being?
DT: Yes, definitely. Cycling has helped me to increase my stamina and build strength.

SCMRH: What advice would you give someone who is looking to start cycling to work?
DT: Cycling is great fun, but it is important to have the right equipment (such as a helmet and water bottle). It is very important to know the rules of the road that apply to cyclists, including practicing the route on a weekend or during non-peak traffic times. I encourage everyone to review Ontario’s Guide to Safe Cycling, a detailed handbook of rules and safety standards, which is available on the Ministry of Transportation Website.

Try it once! Bilal, from Cole Engineering did just that! His entertaining story about how he discovered that cycling was a good option for his commute may inspire you and your colleagues.

“Over the last few years, cycling has become a big part of my life and has helped me transform my life style. My passion for cycling began in the summer of 2008. I worked at Canada’s Wonderland and commuted from Etobicoke to Vaughan via TTC and YRT. Having to transfer from two different transit systems was not only expensive, but also a nuisance. The schedules for connecting transit systems were sometimes unreliable and the probability of missing the bus was very high.

At the sight of this troublesome situation, I wondered if it would be crazy to strap on a helmet and do some riding. I decided it would be worthwhile to seek the opinion of my coworkers. However, almost everyone whom I had discussed this idea with thought that I had a wild imagination. At risk of being considered crazy, I dismissed the idea and went about my normal commuting practices. However, after missing a connecting bus and getting to work late, I decided that I had to give this crazy idea a shot.”

Fatema absolutely loves her job, but the daily commute from her Brampton home to GENIVAR in Markham, which usually takes more than an hour, is often exhausting.  Fatema tried using the 407 Express Toll Route (ETR), and while this did shorten her travel time, it also emptied $400 out of her wallet each month.

After a few attempts at forming a carpool over the past couple of years, Fatema finally had success. In March 2012, with the help of Smart Commute’s Carpool Zone online ride-matching service, she was able to find a compatible carpooling partner and they both agree they make a good team. “Having a carpool partner has been a blessing; it has really improved my overall drive into work and has reduced my commuting costs,” she says. “I have realized savings of almost $200 a month between toll charges and gas.”

Up to four times a week, Fatema’s carpool partner, Angelica, starts out at 6:50 a.m. from Georgetown and arrives at her house in Brampton 30 minutes later. From here, they alternate driving duties to their workplace in Markham.

For the most part, this carpool has been problem-free. “In the beginning there were a few challenges in time coordination, but with some minor adjustments and great communication, we have managed to make things work,” explains Fatema. These carpooling partners have developed a lasting friendship through commuting together. Sometimes they even carpool to the gym after work – now that’s some great motivation!